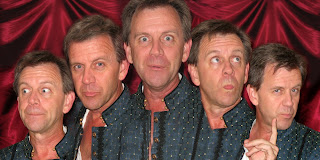 Thanks, Shakespeare, or whoever you are… too humble, too noble, to take a bow without bringing shame to your family… or attention to yourself.

Thanks to you, I have a job today.

Thanks to you, maybe 20% of the actors in live theatre are able to sustain careers. Your existence is the closest thing we have going towards an “Actor Full Employment Act.”

Thanks to you, perhaps, the live theatre exists as a going concern… as something other than a relentless parade of musicals.

Thanks to you, perhaps, the English language exists as a going concern. 450 or so years ago, you gave us a language upon which we could hang our hats. Words that cemented thoughts in place… Thoughts that cemented characters in place… characters that cemented ideas in place… Ideas that put a frame around life as we have known it for 400 or so years.
Today I got to recite a bunch of words to an audience that DID NOT CARE that they had been spoken a million times before. I got to pretend that I was the first guy who ever thought of phrasing these ideas this particular way… and the audience laughed and gasped and sighed as if they were the first audience that ever heard these particular words… understood these particular thoughts… recognized these particular characters or grasped those particular ideas. They put a frame around life that was unimaginable before those lights came up, and that moment realized itself.

And they walked out tonight understanding themselves better, having seen a perfect deceit, witnessed a perfect murder, battled a perfect enemy, mocked a perfect fool, scorned a perfect knave.

The nature of these “perfections,” realizing a particular character, or a particular trait or foible brings these plays into a space in which they resonate with the collective unconscious. 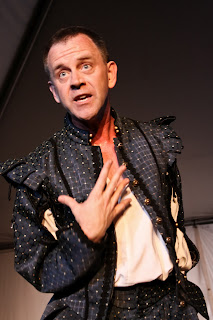 These people live so close to the collective unconscious, embodying a prototypical ideal, that one wonders whether, had there been no Shakespeare (or whatever his name was), would we not have created these characters all over again by ourselves… assuming that the theatre of this alternate universe had survived the creation of the movies, TV or the internet.

So… thanks, Shakespeare…! That alternate universe is nowhere near as good as the one that you helped us to realize.