The View From Here: Evanston, IL 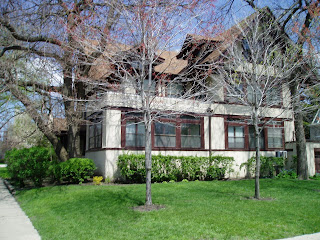 Okay, I haven’t moved into the new space yet … I’ve been trying to clear my desk so that I could hit the ground running when I do, but I should be getting in there this Sunday night, at which point, I begin the WEEKLY REPERTORY PERFORMANCES IN CHICAGO! … or, well … Evanston.

As promised, this is the schedule for those events, and those of you Chicago friends who have been bugging me about wanting to see this or that show out of the repertory … I WILL BE PERFORMING ALL OF THEM … IN ROTATION!

Yes, that’s right, the apartment is big enough to perform my shows in! Not so much seating available, and if we get an audience of more than say ... seven, I may start asking you to bring a chair along with you when you come!

Which means that you’d better e-mail me (tim_mooney@earthlink.net) to let me know if you’re coming!

At that point, I resume the tour, with a conference in Baton Rouge, and shows in Winnipeg and Minneapolis.

Depending on how goosey I’m feeling about all of this, I may actually attempt to do a double feature, or all three shows in one night at some point, and I may introduce some new material, but I’ll announce that later in the summer.

While I’m thinking of it, I got some nice feedback from my last performance stop of the spring, with the following comments from the Gonzaga University performance:

Outstanding introduction to Moliere. What I also wanted to thank you for was the classical acting workshop. Your techniques on including the audience, being seen and heard, and voice were simply excellent. My students were already using them the next day in class, and I am eagerly awaiting your book, which will, I'm sure, go into greater detail on what you showed us in the workshop. Your workshop suggested to me an approach that is direct, vital, and very effective.
Brian Russo, Gonzaga University

You de-mystified Shakespeare in a mere 90 minutes. What I loved was it was all about "doing it." So rather than weeks and weeks of preparation and all this reverential build-up and approach, you just plunged right in and shouted out the lines. I found this enabled each actor to find confidence in their own voice and rhythmic style--this latter is especially what came out of the "live" exercises, I found I had to find some sort of cadence to give the words meaning. (I've always found the phonetic-type drills very boring and intimidating, it was great to actually make use of the Bard from the get-go.) So, once again, thank you for sharing your art and wisdom. In essence, you were philosophizing, which revealed that you've been practicing your art with awareness and reflection.
Tony Osborne, Gonzaga University