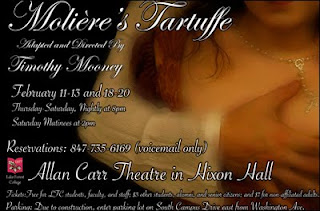 The day after my return from the Pacific Northwest, I turned around and headed north to Wisconsin, for the Wisconsin Theatre Association, where the Middleton High School version of my “The Miser” was competing in the state finals. The production was terrific, with one especially good performance by the actor playing the Miser, Harpagon. (My cousin Jan, who met me in Whitewater for the performance, thought he was a professional actor.) The competition judges named it to “All State,” which is apparently one step shy of the highest rating, “Critics Choice.” The only reason it did not receive “Critic’s Choice” is because the show ran a minute past the competition’s 35-minute limit. 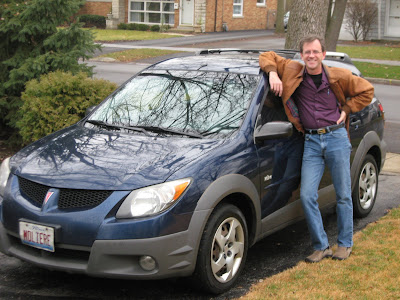 On my way home from Whitewater, the alternator gave out on my car, and I had to have it towed to a shop, while Dad drove up to pick me up in McHenry, Illinois. 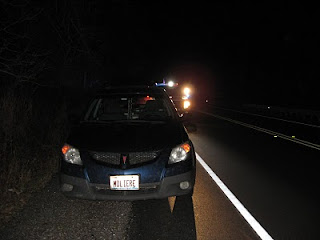 You might have assumed I’d be in a bad mood from my car breaking down, but between the success of the performance, and my awareness of the thousands of much worse places (mountains, deserts, snowstorms…) in which my car might have given up the ghost, I was content to break down just an hour from home.

I went ahead and had it fixed, but, with over 344,000 miles on it, I knew that its days were numbered, and this wake up call would get me to replace the Molieremobile with a car that would carry me the next several hundred thousand miles.

Even so, I found somebody who wanted to buy the car (making me back the money I invested on the new alternator and then some), while buying a new Ford Escape, a car which would give me relatively good mileage, along with the room that I seemed to be lacking as props and costumes from multiple shows accumulated behind me. 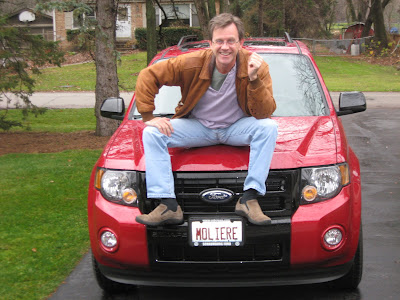 Back in the Chicago suburbs, I was quickly in rehearsals for “Tartuffe” at Lake Forest College (see below), and throwing myself into my semi-annual e-mailing campaign (about 15,000 e-mails to Theatre/French/English faculty). I was also getting serious about my latest one-man show (particularly given that I was promoting it in the e-mails that were flying out from my computer).

The name of the show has gone from “Shakespeare Roulette,” to “Shakespeare Lotto” to “Lot o’ Shakespeare.” About 6,000 e-mails into my campaign, I discovered that at least one spam filter was keeping my e-mails from going through because the word “Lotto” was in the message. And thus “Lot o’ Shakespeare” became the official title. One friend suggested that I should call the show “You Won The Nigerian Shakespeare Viagra Sweepstakes!”

But, during the course of the break, I went from having, perhaps 15 monologues memorized to 38! And three schools booked my show for this spring, sight unseen! (Without even a review to demonstrate the value of the show!) (These were all venues that had booked me in the past, so at least they had some confidence in the personnel.)

Somewhere in the middle of things (December 8-January 11), Lake Forest College went on break, I drove out to pick up Isaac and bring him home for Christmas, and I returned to Michigan for the American College Theatre Festival (Region 3) festival. They were bringing me in to perform a workshop and to respond to a performance of Sam Shepard’s “True West.” The workshop was thinly attended (4 people), though I enjoyed visiting with old friends and correspondents. The final morning of the festival I gave my response to “True West,” which went fairly well. As I was getting ready to leave, the students asked about my background.

When I told them that I was a touring actor, travelling across the country with “Moliere Than Thou,” one student asked: “Are you on YouTube?”

Suddenly she perked up: “I saw you! I was researching ‘Tartuffe’ and came across your videos! You are AWESOME!”

Well, that made my day.

I returned home, and returned to rehearsals for “Tartuffe,” and “Lot o’ Shakespeare”, finishing up the e-mail campaign (still cleaning up the accumulated response e-mails from out of my box).

And, with less than a week before getting back on the road (first step Mardi Gras!), Tartuffe is previewing tonight (February 10), with opening night tomorrow, February 11! It’s an amazing show, perhaps the result of the accumulation of bits stolen from the twenty or so productions of this play that I’ve seen so far, as well as a terrific cast, and some creative thinking that has gone into pre-show pantomime, between scenes scurrying, and a grandiose curtain call. Eventually, I should have some video posted, but if you can make it, it’ll be worth the time and effort! (I fully expect that it WILL SELL OUT every night, so you'll want reservations for this one!) Info at http://www.lakeforest.edu/admissions/news/news_story.asp?iNewsID=979&strBack=/Default.asp Check back next week for video!

Miles on the Escape: 4,5000
Temperature: 20s
Discoveries: I could choose to get upset about the car breaking down, or appreciate how incredibly lucky I was to safely drive a car with over 340,000 miles back from the West Coast, find a buyer for it, AND get an amazing new vehicle. – The e-mailing campaign goes better when I offer one-time discounts to the teachers when I’m passing through their states. – Memory is limitless. We may assume that there is only so much stuff that we can cram up there, but there is always room for more.
Attendance: 4 + 20 = 24
On the I-Pod: Dresden Dolls and Amanda Palmer
Next Performance: “Tartuffe” at Lake Forest College, 2/11-2/20/2010; “Lot o’ Shakespeare” at Richardson High School, Richardson, TX, 2/22/10.
on February 10, 2010 No comments: