First the immediate news! In preparation for the Minnesota Fringe Festival, four Chicago-area theatre groups are holding a Fringe preview here in Chicago on Friday, July 25! This Mini-Minne Fringe will be a the Alogon Gallery, at 1049 N. Paulina 3R (Entrance on Cortez) Starting around 8pm. There’ll be four 30-minute performances, climaxing with six numbers from “Karaoke Knights, a One-Man Rock Opera!” (Admission will be $10, and there’ll be beer available.)

Next: Moliere is hipper than hip! We now have MOLIERE RINGTONES available! Be the first in your class to have your phone ring with the mellifluous “Stop, thief!” Or, for that special someone, “I’m Looking For a Groupie!” Click below to test them out!

Well, it’s been a long slog since my last blog entry, and I won’t bore you with too much of a play-by-play.

The show that concluded the Spring tour at Centre College was a blast. First of all, they designed the best poster I’ve ever seen for the show (see below), and the woman who designed the poster was generous enough to let me use it for my own purposes, including passing it on to other schools, for their publicity purposes. 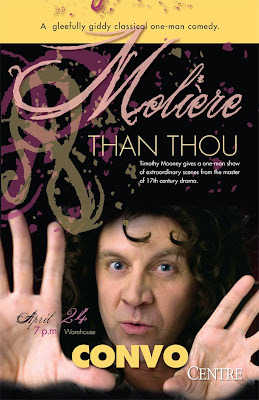 My host also wrote a rather brilliant promotional e-mail to the school’s distribution, and the following went out:

Here's an invitation to Molière Than Thou. It is a Convocation, a one-man show done superbly by Tim Mooney. Tim performs at the Combs Warehouse on this Thursday evening, April 24th, at 7:00 p.m.

If you are suffering from Molière deficiency--the basic symptoms of which are
--atrophy of the ability to distinguish between sincerity and hypocrisy,
--obsession with money and savings,
--compulsion to sacrifice friends and loved ones to grand ideas,
--and delusions of grandeur
--then Tim Mooney is the remedy you need! Get well.

There were all sorts of difficulties with the venue, where I ended up performing on an 8x8 platform, set on a diagonal, to give me a slight more vertical and horizontal distance to travel (high school geometry was coming back to me, and memories of the calculation of the hypotenuse). The room was hot, and I was sweating under unfiltered lights … But the room was packed! We’d set up about 100 chairs, and well over 150 people showed up. I could see people watching from a staircase from at least 100 feet away. Again, the volunteers were a blast, most notably the “Doctor” volunteer, and the host was quite pleased with the results.


Racing home, I dove full time into my e-mail campaign for the 09-10 season. I spent the entire month of May sending out to Theatre, French, History and English profs. Since the theft of my computers, this was the third such mailing to this particular list, and the repetition, along with the early start this year, seems to have made a big difference. While last year I had perhaps 12 bookings on the schedule by June 1, this year I was up to 23! Six weeks further along, I’m at 34 bookings, which is quickly approaching the total set up for the whole of last year!

In the course of my massive e-mailing, a few reviews found their way back my way. This letter from the production of my version of "Imaginary Invalid" in California, where the director wrote "The show is going extremely well. Sold out nearly every performance":

I want to let you know that a large group of satisfied viewers saw THE IMAGINARY INVALID yesterday and came away with admiration and pleasure. We saw a professional production with outstanding actors in a play that seldom gets onto our stage. Imagine, a rhymed version of a French play that, in the original, was not rhymed at all! BRAVO! (Dr. Nathan and Evelyn Kravetz)

This from the Illinois Wesleyan Argus:

Mooney owns the stage in "Moliere Than Thou"
...Mooney's energy was immediately felt throughout the room the moment he took the stage. His enthusiasm quickly drew in the audience's attention, and his talent for comedic timing was nothing short of hilarious. ... [The almost bare set]allowed Mooney to fill the stage with his presence. It was all that was needed as Mooney's characters filled in what was left to the imagination.
... The audience participation made for a more intimate scene and setting, and at times it made those audience members who were not singled out laugh their hardest. ... He was infectious, causing the audience to follow his lead, getting everyone to let loose and just enjoy the show. ... Mooney [transformed] the 17th century literature into something accessible in modern times. "Moliere Than Thou" proved to be a hilariously entertaining performance, bringing the audience back in time for a brief escape from the realities of everyday life." (Allegra Gallian) 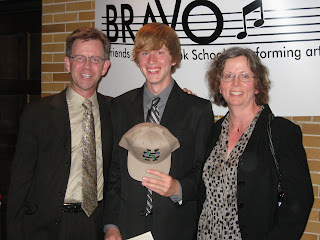 At the beginning of June, I paused for a quick trip out to Detroit for Isaac's graduation. Isaac is now, officially, taller than me ... at the age of 14!

In addition to the push for bookings, I took a weekend to work as a Pathways group leader, which was, as always, inspiring and encouraging. I threw myself back into my writing, adding more chapters to the directing book I’ve been formulating, and editing some more of my Moliere scripts into 40-Minute variations for high school competitive use. Late in June I attended the International Thespian Festival, and found myself making some terrific connections with the publishers in the exhibit hall. There was a new guy sitting at the Playscripts booth, and when I introduced myself as one of the Playscripts authors, he immediately lit up, having read several of my scripts in recent years. He was extremely encouraging, and given the fact that I had my mornings free while at this conference, I went back and edited some of the scripts that I’d been sitting on, and e-mailed them to Playscripts.

Since that conference, I have, in fact, dug out three more scripts, which I’ve been working on for publication, and between full-lengths and 40-minute variations, I could have as many as 20 plays published before long!

Meanwhile, I met up with the Acquisitions Editor at Dramatic Publishing, who I’ve been sending stuff to for over 10 years now. (I’d gotten to know her cohort, who usually runs the booth, but this time she was there.) She reminded me that they’ve been holding one of my scripts for a couple years now (an adaptation of a Ray Bradbury story), and inquired about obtaining the rights! 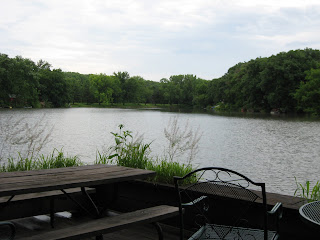 I also got to visit with my old friend David Landis, who put me up in his lake house while I was in Lincoln. I wish I could have stayed there more, but the evenings’ schedules were filled with receptions, and I felt it was more important to be available with brocures in hand. Inevitably, if I left my room without brochures, I would immediately meet somebody who was interested in booking me!

Meanwhile, I was doing two workshops a day, and while the attendance was thin, the enthusiasm was high, with responses such as:

"The classical acting class I took from you is phenomenal and I'm so glad I had the opportunity to participate in it." (Greg Prusiewicz)

My brother Pat came out for a visit in early June, and I began planning for the mid-July American Association of Teachers of French conference, which this year is happening in Belgium! Since my son, Isaac, has been studying French for three years now, I invited him to join me and, following the conference, he and I will swing down to Paris for three days, visiting the Moliere memorials, Versailles, the Eiffel tower, and the Comedie Francaise.

I seemingly blew out my knee when jogging last spring, and it’s been a long time getting back up to speed. Ready or not, though, when July 1 hit, I had to dive back into rehearsals for “Karaoke Knights, a One-Man Rock Opera,” which will be opening in a bar in Minneapolis on July 31. All has gone well, and I’m starting to get some “lift” in my grande jettes again. The show seems to be moving forward nicely, and though I’ll soon be taking a week off when I head off to Belgium, I’ll still have about a week to work on it when I get back to Chicago. 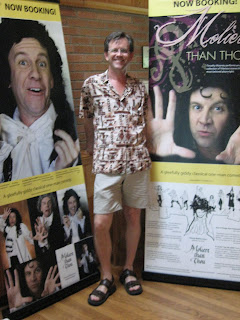 The next few days will be caught up in posters, press releases (for Minneapolis) and shipping stuff off to Belgium for the conference. I’ve invested in some new banners for my booth, and the huge copies of the publicity shots, as well as the fun poster from Centre College, should make my booth twice as eye-catching.

Discoveries: People who come up with really creative ideas (posters, publicity blurbs) are more than happy to see their work live beyond the single-day’s impact. * Marketing campaigns have a cumulative impact, and the willingness to repeat my approach to the same e-mailing list gets more response with each successive assault. * I am my own worst critic, and past rejections lead me to imagine that my play submissions are an imposition, rather than a fun opportunity. * Don’t go anywhere without brochures … or business cards, for that matter. *
On the i-pod: Mastering French, discs 2-13

Political Comment: Anybody know which of our bill of rights is still in effect?
on July 09, 2008 2 comments: